A Layman’s Explanation of Mocking and Dependency Injection

A Sad Tale of Woe Again

So your husband or wife is a software engineer, and you’re not. You like the idea of software, you even use software, but you are as interested in what goes into creating software as you are in soap manufacturing. He (or she, but programming is still a stupidly male-dominated field, so we’ll stick with the percentages) comes home, blathering on about his day. The conversation goes something like this:

Him: “They handed me a legacy codebase today. It’s ancient .Net 2 stuff. I’m supposed to refactor the existing code and, in parallel, rewrite it to .Net 4.5.”

Him: “I spent about five hours just looking at the stack. What a mess! I mean, it’s not bad, really, but before I make any changes I need a way to unit test, and it’s not architected for that. I don’t want to go down the rabbit hole since I’m rewriting the whole thing using SOLID DDD principles, but I’ve got to get some DI going, and I’m going to have to figure out how to mock some of the internals.”

You: (nodding, and thinking, “If I pull weeds today, then I can mow tomorrow and feel virtuous two days in a row, and treat myself to wine at lunch on Saturday.”)

Him: “Can I brainstorm the unit testing with you? Just, you know, talk it out? That would really help.”

You: (nodding slowly, thinking, “O! M! G! Just cut off my head and pour cabbage into it! Still, he’s a good man. All I have to do is listen.”

Him: “Stop me any time if I can explain how something works.”

Unbaffling Language to the Rescue!

The only thing worse than listening to a software developer talk about code is asking a sailor about an upcoming voyage. Here are some actual nautical terms and phrases: cumshaw, geedunk, abeam, baggywrinkle, beat to quarters, by and large, coxswain. The definition of “death roll”?:  “In a keel boat, a death roll is the act of broaching to windward, putting the spinnaker pole into the water and causing a crash-gybe of the boom and mainsail, which sweep across the deck and plunge down into the water.” [Wikipedia]

Programmers don’t need to live lives of unending, habitual obfuscation. We can explain, if we but remember the lessons of literature.

Imagine you’re a high school teacher. Now, imagine that you have a four-inch wood splinter going through your left eyelid. Which is easier on your mental state? If you say “splinter,” you must be a teacher.

Now, imagine a magical school where you don’t have to grade your own papers. You finish your eight-hour work day, go home, take an hour planning the next day’s lessons, have dinner, and study an hour or two for your required continuing education course, but you don’t have to grade at least twenty-five of the 120 five-page essays from mid-term exams.

Instead, you get to hand the exams to your Grading And Reports Department. It works like this:

Recently, you were tasked with testing the GARD system. You’re a great choice, because you helped create the department. Here’s what you know:

You give the papers to Mr Murphy 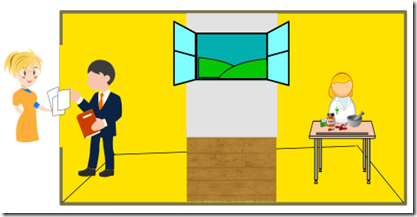 Mr Murphy gives the papers to Dr Malone, who does mysterious, magical mischief. 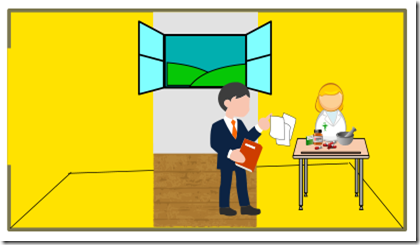 Mr Murphy gives you back the papers. 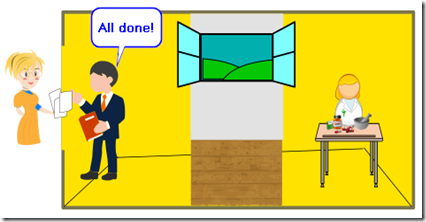 You have only been asked to test the report formatting. This is critical! You are not verifying the grades are correct. You only care about the report. You devise this test

Given a stack of 120 papers, if the grades are abc, then report should look like xyz.

So here’s your challenge. You are going to give Mr Murphy 120 papers. He’s going to create the report. You’re going to compare what he gives you with how you know the report should look, right down to the numbers and letter grades on it. If they match, the test passes. If not, the test fails.

“Crap!” you think, “I can’t depend on Dr Malone to always give Mr Murphy the same grades! Besides, it takes her three days on average to grade that many papers, and I want my tests to be done in a day. It only takes Mr Murphy a few hours to prepare a report.”

You develop a plan. You are a genius.

More laughable illustrations, but let’s include the programming terms.

We have a dependency on our grader, Dr Malone. We’ll change the GARD room so that we can give it a real or fake grader. This is called Dependency Injection. 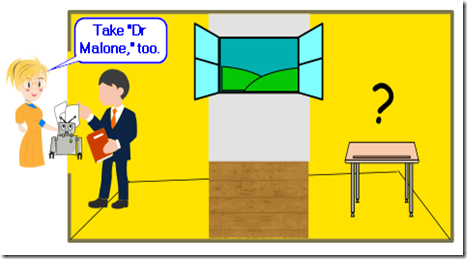 Mr Murphy doesn’t care which grader he gets answers from. For our test, he uses the fake one. That is, he uses a Mock (also called a fake, or stub, or substitute). 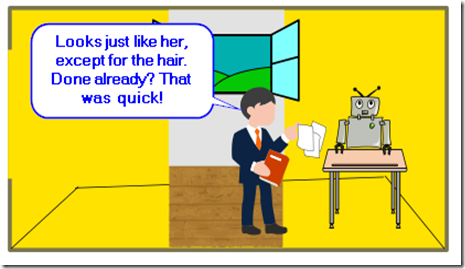 We get back the report made from data we injected. We just want to compare the reports, the work Mr Murphy does. 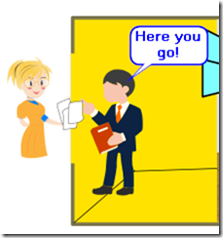 If they match, the test passes. If not, fail!

How a programmer sees this

A programmer sees it the same way. Except it’s all words that look like English, but are alien-ese. 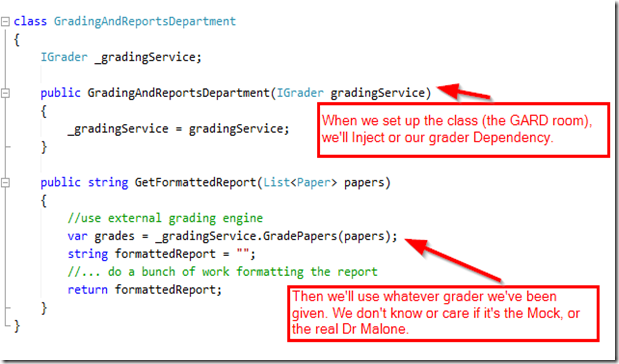 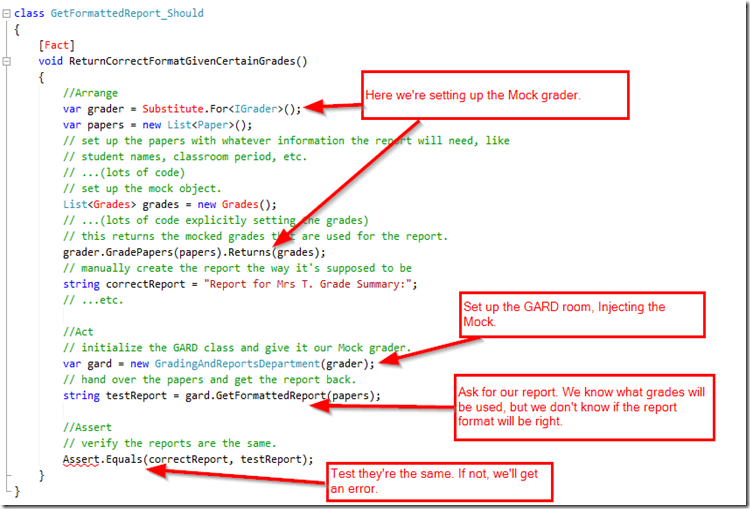 Dependency Injection and Mocking solve two problems that affect how well software can be tested.

It takes some work, but once you get your head wrapped around these concepts and their implementation, their importance becomes clear.