I'm sending my new Acer R7 in for repair/replacement. I like the unit, notwithstanding some bad reviews. However, one problem I found two days ago is that pressing the space bar on the bottom edge worked about half the time. And that's where my thumb goes automatically. I shouldn't have to change my typing position to accommodate a hardware flaw, and as a software engineer typing is my life.

Hopefully, they'll just put my hard drive in a new unit and return it. I'm equally hopeful the keyboard is just my computer, not a manufacturing flaw. Or, if it was a flaw, that they've fixed it. I also had some issues with the trackpad, though some of that was my other fingers drifting onto the pad like jellyfish tendrils.

I was going to restore a backup of the R7 to a Zotac box that was no longer in use. But that was going to be a huge hassle due to hardware differences. Instead, I elected to install Joli OS (I already had an account) on the Zotac and see how much I really depend on my Windows installation.

One item I knew I wouldn't have--Visual Studio (unless I go to the Wine store). But I decided I could, you know, just work at the office. The other item, VPN/RPD access to my work computer in an emergency...well, I'd just have to see if anything existed in the Linux world.

Joli is a Linux distro that wants you to only use cloud (i.e. browser)-based applications. I use Google Apps, so this wasn't going to be a hardship on the email/calendar front. I don't keep all my documents in Drive. That'll be part of the experiment.

I wasn't successful with the CD installation. That may have been a problem with my external CD drive. I created a USB installation using their tool, and installation the proceeded smoothly. I had to search around for instructions on creating the USB install. I wish a link had been on the same page as the ISO download link.

After installation, there was a quasi-wizard for getting some free drive space (Box, DropBox, SkyDrive). I wasn't keen on the wizard because it seemed like those were the only options, yet I knew I could set up Drive. I just clicked through to get to the main interface, then use the Add More Services button.

Joli's native screen capture tool isn't obvious to find. From the Applications Launcher, click Local Apps. No keyboard shortcuts, so I'll need to search for a better tool, which means getting re-familiar 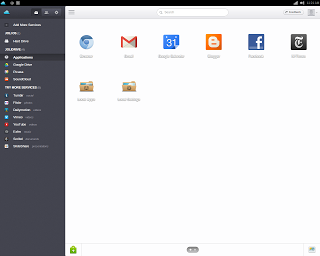 The first issue I found is that Joli isn't running at my monitor's native 1920x1080 resolution. In Settings > Monitors, that resolution isn't available. For the moment, I'm leaving it alone. The few sites I checked talk about getting into command line with Linux config files, and that could be a multi-hour adventure.

Where am I right now? I have Google Apps and Facebook connected. To try soon:

One thing has been an eye-opener. I didn't realize how many sites exist that give free storage space. A person could not only have up to 40GB by using several services, but by copying between services could have some ad hoc redundant backup. Who know, maybe there's already a service for that?