Many to Many With Payload and One to Many

Edward learns what his mother knows.

Edward Farley put his new hover tablet down in disgust. "Mom, I can't get it to work!"

His mother came in from her office/studio. "Which 'it' would that be, dear?"

"Ah," said his mother. "This is the puzzle Professor Relvar sent you, after he received your thank you card for the tablet?"

"Yes," mumbled Edward, miserably. "I thought I could figure it out. I guess I'll have to ask him."

"Edward, I realize I'm not at brilliant as Professor Relvar, but I do know a thing or two about databases and the Framework. Would you like my help?"

She smiled and sat next to him. "I think the Professor would say something like, 'Now, young man, what seems to be your trouble? I assure you it isn't my trouble, though I may trouble myself to help you.'"

Edward stared at his mother. "That sounded just like him."

"Well, then," she continued, "explain the problem."

"I have umbrellas. An umbrella could be used by many people, and a person could use many umbrellas."

"A Many to Many relationship," said his mother.

"Right. Except an umbrella for a person becomes a color. So, it's a Many to Many with Payload. Now I want to show that an umbrella-person combination can have many umbrella covers. The Professor said I could use the join table's UmbrellaId and PersonId columns as the key, but he said there was another way and I don't remember."

"May I use your tablet?" his mother asked. Edward handed it to her. She pressed several buttons and the tablet projected its screen on a far wall.

What you are trying to do, Edward, [his mother continued], is keep your table primary keys simple. It's nice to not use composite keys unless you have to, because it's easier to relate tables using a single column. Instead of starting at the beginning, let's start at the end. Here's how you want the tables to look. 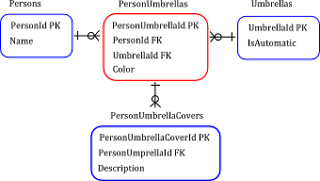 It's easy to add a new primary key to the class. And if we remove the attributes that tell PersonId and UmbrellaId that they're part of the key, the Framework will still see them as foreign keys because they're named according to convention. Otherwise, you'd have to use attributes on the navigation properties to indicate the foreign key property.

Let's also add the related PersonUmbrellaCovers class. Now, you understand, dear, that this isn't a practical thing to do? Having an umbrella cover for each unique person-umbrella? But, the Professor does love his little puzzles. Here is how our classes will look.

Let's not update the program's output yet, and just run it so we see how the database turns out. [She did so, and they viewed the tables] See? We have the tables we wanted. Now, dear, are we finished?

[Edward thought hard, then shook his head. "Couldn't we have duplicate PersonUmbrellas?"]

Exactly! I'll have to tell you father you really were paying attention to the Professor, and not just eating ice cream. Our problem is that by no longer setting the PersonId and UmbrellaId columns as part of a key, they aren't guaranteed to be unique. We need to do something similar to your Magnifier serial number problem. In your DbContext class, we'll add a uniqueness test, and a validation.

Hmm. If I were writing this, I would create an extension method for ValidationContext that returns the enumeration. That way I could reduce the amount of code. But, we'll leave that for after dinner. Now, Edward, update the program while I fix us each a Kiwi-ade. [Edward did so, clarifying why two errors would be thrown. His mother returned.] Ah! Good, dear, you put the new code near the other Umbrella code, instead of at the end. That shows you're thinking about context.

[With his tongue between his teeth, Edward ran the program.]

And the program says we're finished! I think so, too. Time for Kiwi-ade.

Kiwi-ade (When I wrote this, I had no idea there were real kiwi-ade recipes.)