Joe Developer: When (not) to Drink Coffee 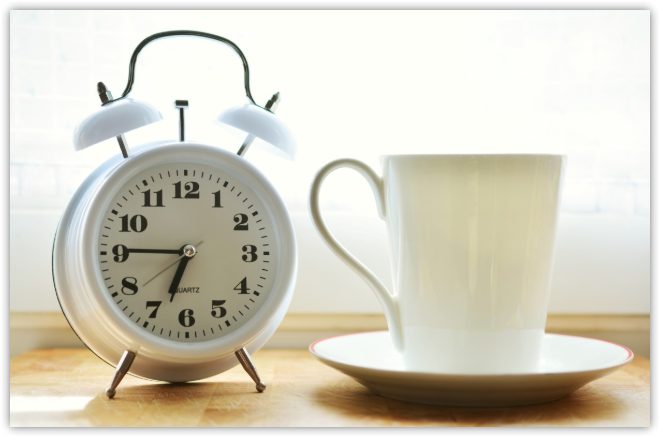 Science shows drinking coffee first thing in the morning negatively affects one’s circadian rhythm by inhibiting the production of cortisol, which the body uses to naturally wake us up. Drinking coffee when cortisol levels are falling helps us stay evenly alert. The recommended times are based on the average person who gets up around 6:30am. Adjust accordingly for your own consistent wake time.

Best summary for both time-of-day and health benefits:

The Best Time of Day to Drink Coffee, According to Science | Inc.com

The best time to drink coffee according to science - I Love Coffee (with infographics!!)

The last entry seems to have begat many others. It’s my favorite. It makes me happy to read it.

None of these articles discusses how to shift your coffee consumption, which is a shame. It's like telling a smoker, "just quit." The thing is, cortisol production doesn't just leap back into action. I've taken budesonide, which decreases cortisol production, and the weaning off period is 2-4 weeks. So, I recommend making the change gradually.

I first read this 2014 article about why you shouldn’t drink coffee first thing in the morning, i.e. right after getting up. Curious, I tried to find out more on the subject. I turned out there are several similar articles. In all cases, the stories originate from an article by Steven Miller, Ph.D., The Best Time for Your Coffee.

Now, Dr Miller is a scientist, and he cites his sources, and he’s clear about what he’s saying and not saying. Check out the comments on his article; he defends against a few hostile readers.

But where did he get his data? That’s from a study in 2009, the sciency-named Modified-Release Hydrocortisone to Provide Circadian Cortisol Profiles. This article, which has 80% words I don’t understand, includes this graphic showing natural peak cortisol levels. 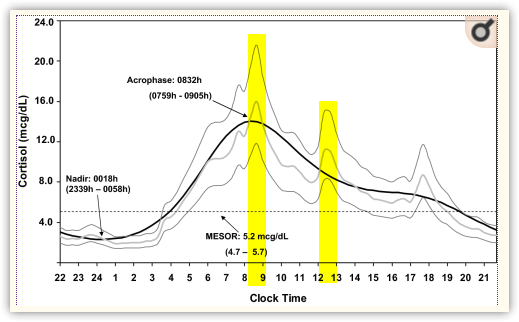 Dr Miller doesn’t point to a specific study proving that people should drink coffee at a particular time. He states his opinion based on the research. I liked his interesting pharmacological approach (emphases are mine).

Drug tolerance is an important subject, especially in the case of caffeine since most of us overuse this drug. Therefore, if we are drinking caffeine at a time when your cortisol concentration in the blood is at its peak, you probably should not be drinking it. This is because cortisol production is strongly related to your level of alertness and it just so happens that cortisol peaks for your 24 hour rhythm between 8 and 9 AM on average (Debono et al., 2009). Therefore, you are drinking caffeine at a time when you are already approaching your maximal level of alertness naturally. One of the key principles of pharmacology is use a drug when it is needed (although I’m sure some scientists might argue that caffeine is always needed). Otherwise, we can develop tolerance to a drug administered at the same dose.

Are you wondering what cortisol is? I did, too.

Cortisol, a glucocorticoid (steroid hormone), is produced from cholesterol in the two adrenal glands located on top of each kidney. It is normally released in response to events and circumstances such as waking up in the morning, exercising, and acute stress. Cortisol’s far-reaching, systemic effects play many roles in the body’s effort to carry out its processes and maintain homeostasis.

Cortisol is part of the fight-or-flight response. We don’t want too much cortisol, but it’s normal to get a boost of it at specific times, such as waking up.

The problem with caffeine during peak natural cortisol production is that the body, in effect, says, “Hey, this coffee’s doing a great job! Turn off the cortisol!” Over time, we get less of a boost than we used to, so we drink more coffee. And our body says, “Wow, more coffee? Better turn down the cortisol again!” And so on.

I've had some trouble in the past getting good, consistent sleep. I can’t blame it all on how I’ve been drinking coffee, but here's my current, typical morning.

What has changed since adopting this routine is I don't feel I need coffee first thing in the morning to wake up. And that's because, I don't! If I miss some coffee, it doesn't throw my whole sleeping pattern out of whack, either.