If you develop and/or consume NuGet packages in solutions of reasonable complexity, you'll eventually come up against an assembly that doesn't load, giving this error:

System.IO.FNeLoadException: 'Could not load file or assembly 'NewtonsoftJson, Version=9.0.0.0, Culture—neutral, PublicKeyToken=30ad4fe6b2a6aeed' or one of its dependencies. The located assembly's manifest definition does not match the assembly reference. (Exception from HRESULT: Ox80131040)'

What causes this error? What can you do? What should you do?

This isn't a definitive reference, but it steps through a simple prototype app that reproduces the problem and shows paths forward.

Fundamentally, during runtime your solution is trying to load two different assembly versions at the same time.

A Visual Studio solution can be made of multiple projects, each project can have dependencies on other projects as well as assemblies installed via NuGet. In a setting where teams share code, projects in a solution could "belong" to different teams, making it challenging to keep all package dependencies up-to-date and tested.

Microsoft has a mechanism for helping resolve these dependencies: Assembly Binding Redirects. Essentially, information is added to the project's web.config or the built app.config that says, "If the requested assembly version is within this range, load this specific assembly version."

Binding redirects are used when the assembly is strong-named. A strong-named assembly is uniquely identified by its name and assembly version using a key, which the consuming assembly knows about. The purpose of strong-naming is to mitigate malicious replacement of assemblies (i.e. dlls).

In short, strong-naming causes the "could not load assembly" error.

Strong-naming NuGet package assemblies is recommended for open source projects for the reason stated above: tamper mitigation. In .Net Core, Microsoft is moving toward strong-naming as a default. However, Core projects handle strongly-named dependencies differently than Framework. By default, they automatically resolve to use the latest assembly version.

But for internal organization projects, strong-naming in Framework or Core projects may not be needed, which can save a lot of grief.

The basic solutions are:

The Glossary, a Few Rules, and Some Surprises

How AssemblyInfo and NuSpec version maps to File Properties 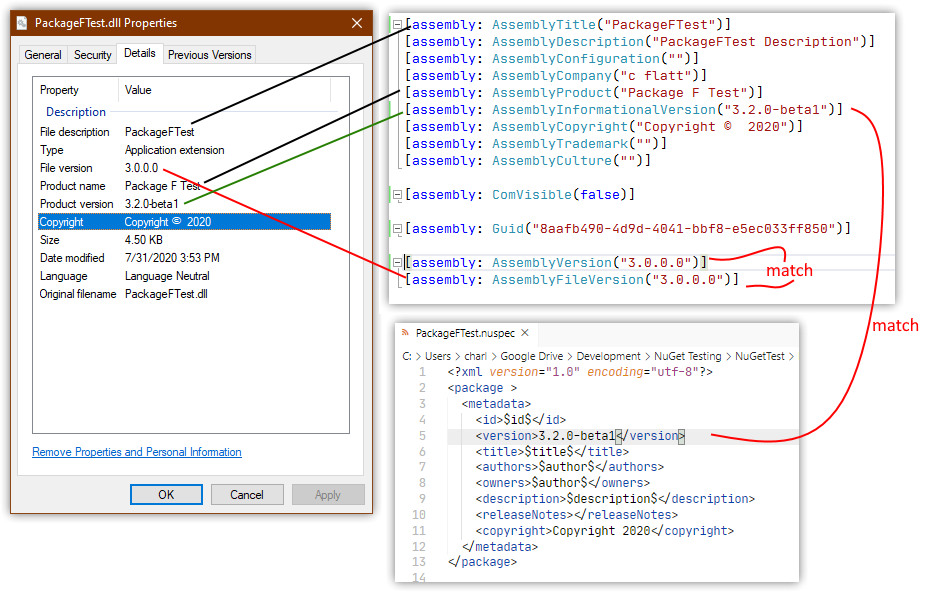 Some reasons NOT to strong-name an assembly (taken from https://softwareengineering.stackexchange.com/a/240941):

I don't know why, but I wasn't able to reproduce the binding problem using a console application. Maybe I never did it right (or wrong). However, web applications are more likely to have the problem because redirects are not automatically generated.

This was a surprise to me, and probably catches many developers.

When Are Potentially Dependent Assemblies Added to the Bin Folder?

The following Framework solution is very simple. Its only purpose is to reproduce the version assembly loading problem.

Create a new solution with the following. In my case, all were .Net 4.7.2 projects.

We're going to build and package PackageFTest six times, so in the PackageFTest folder add a command file named bp.cmd with this code:

We need nuget.exe, which is not included with Visual Studio starting with version 2019. Instead, download the latest stable version and, for this exercise, place it in the Packages folder. Normally, you'd put it in an external folder and add it to the Path.

By design, msbuild.exe isn't added to the Path environment variable. Instead, search for and open the Developer Command Prompt for VS 2019, then change directories to your PackageFTest folder.

Generate a .nuspec file by running nuget spec. Open the PackageFTest.nuspec file and make it look like this. Note that we're allowing token substitution as much as practical. The important thing is that we're explicitly setting the package version. Leave the nuspec file open for editing.

We'll be setting the package's assembly information several times. Instead of doing this the normal way through Project Properties, open PackageFTest\Properties\AssemblyInfo.cs and set these fields.

The AssembyInformationalVersion attribute must be added manually. This is very useful because you can store the NuGet package version, which could potentially be something like 2.0.0-beta1, and be able to view it in file properties.

Let's simplify working with our package. Right-click the solution and choose "Manage NuGet Packages for Solution"

Add a package source that points to your PackageFTest folder, then uncheck the other packages. Now we'll only see our package when it's built and packed.

Let's build all of our package versions. If you followed the steps above, version 1 is ready to build and pack. In the Developer command line, run bp.cmd. The package will be built and packed as PackageFTest.1.0.0.nupkg 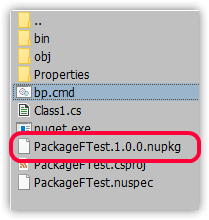 Now you're going to edit the four version numbers. As a reminder, the only ones that matter to .Net are the package and assembly versions. Setting the product information helps us later to see which .dll is in the bin folder. You can not set the file version, if you want. If you do, it should match the assembly version. 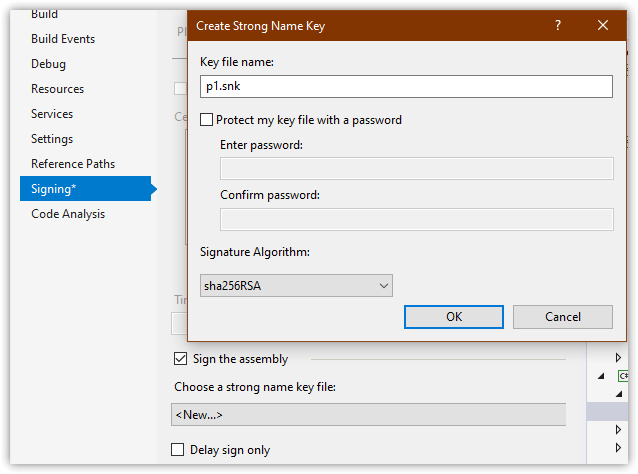 I'm using 3.1.0 and 3.2.0 here to ensure my package versions do not match the assembly version. 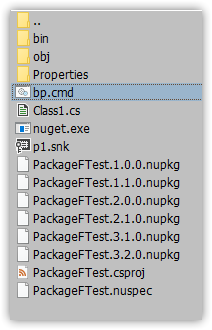 In the Visual Studio > NuGet - Solution tab, refresh the page. 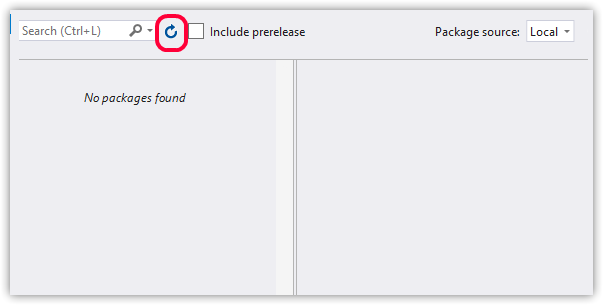 With Browse selected, you should see PackageFTest. Now we'll progressively install the packages, run the application, and see the result.

In this case, the latest version was used, and there were no errors because we are not strong-naming the assembly.

Keep the debugger open and check what's in the bin folder.

Again, the latest version is selected. However, due to strong naming, the application is being told it must load assembly version 2.0.0 and 2.1.0, but only one dll can be in the folder.

Back in Visual Studio debugging, view the Error List and enable seeing Warnings.

If you double-click the warning, Visual Studio will add the following assembly redirect to the web.config file. Otherwise you would have to add it manually.

Stop the application, then F5 again and it will run successfully.

Important Comment out the dependentAssembly xml created in the previous run. We want to prove there's no binding redirection going on.

This is a problem. What if ClassLibrary2 is using a method named GetId2() that's in PackageFTest that's available in package version 3.2 but not 3.1?

An error is thrown, that's what.

What's our solution? As noted above, the best is to set all projects to use PackageFTest package 3.2. What if you can't? How about a binding redirect in the WebApplication to 3.2.0?

No, that makes things worse. It prevents the dll from being copied to the bin folder at all.

The admittedly frustrating answer is to install PackageFTest 3.2.0 to WebApplication1. This forces the latest package dll to be copied to the bin folder.

It's a problem of transitive assemblies. A depends on B which depends on C, but A doesn't directly depend on C.

At this point the application runs successfully.

Automatically resolving dependencies is, apparently, hard. If we were installing multiple assembly versions to the GAC, there wouldn't be a problem. But that's not how modern applications are all deployed. In a sense, we're deploying applications the same way as in the DOS 6 days: the entire application and its dependencies are in a folder. No shared dlls. Except, of course, as seen above, we only get to install one dll copy regardless of its version.

Is this still DLL Hell? Package Hell? No matter how you label it, when things go wrong there's hell to pay. 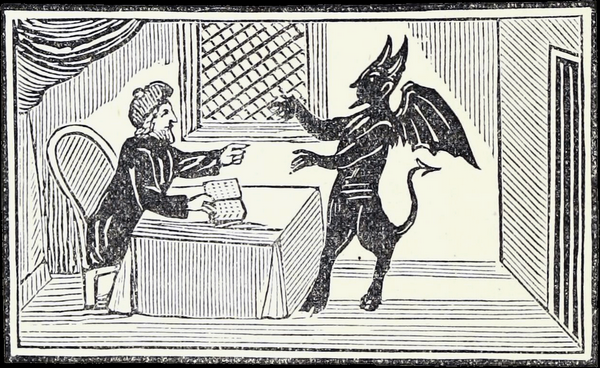