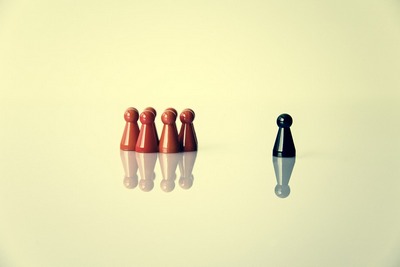 "Remote exclusion" happens when remote developers are treated as less equal than on-site developers. This usually isn't intentional, but is instead a result of group dynamics.

Some behaviors, such as not including remote workers in decisions because it's "too much of a bother" to contact them, are obvious when pointed out. But there are other actions that seem innocuous, yet contribute to the problem. These are"remote micro-exclusions"

Consider the daily standup meeting where the bulk of the team is on site, and a few are remote. Here are two practices that can unconsciously devalue the remote team.

There are three basic ways to communicate with the remote team in a live meeting.

The first two ways are a problem.

What's critically missing without two-way video is the visual cues. How is the remote team reacting? What are they seeing at the main site? What is everyone communicating physically?

If the remote team always goes last, it's likely they'll always have less time. Unless a daily standup is being run really strictly, there's going to be conversation about whatever each developer is working on. If there's no two-way video it's worse. The "main" team will tend to dominate the conversation because they can see each other. Consider that for a team of eight, a fifteen minute standup gives each person two minutes. That's honestly plenty of time to report what happened yesterday, what's being worked on today, what's blocking, getting quick answers, and setting up follow ups on issues that take too long for the meeting.

Yes, this is a standup management problem. "I'll email you to schedule a talk" should be said frequently. But the remote team is still devalued by going consistently last.

Remote work can benefit many companies and employees. It takes effort, but is a worthwhile practice to learn.