These are sane conventions for constructing and naming a database schema. They aren't new, and there's sure to be something someone doesn't like. They are biased toward the .Net EntityFramework, which itself was influenced by the Ruby on Rails ActiveRecord conventions by David Heinemeier Hansson.

Using these conventions makes it easier to translate the tables into classes. While this isn't always desirable (or correct), it often is. 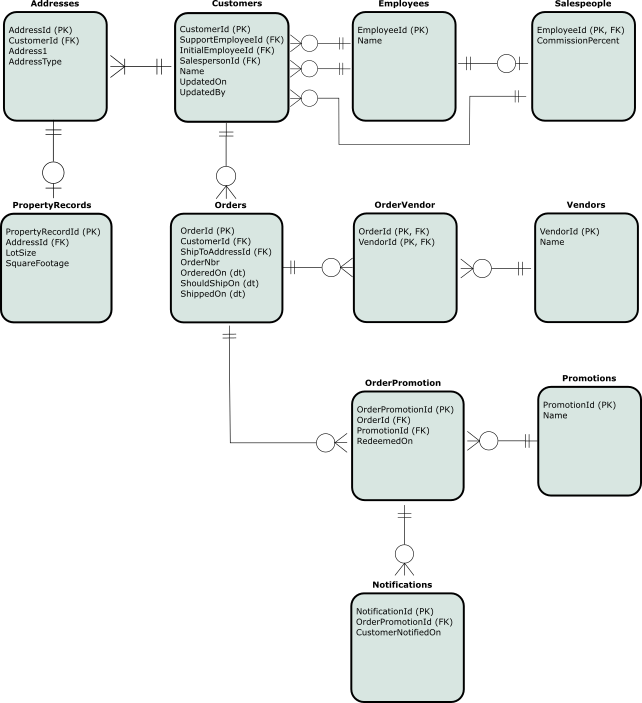 Pluralizing table names reduces the chances of keyword conflicts, and matches how the table will (typically) be treated in an ORM tool.

Note
Using Code First, Entity Framework might pluralize this to OrderVendors. Personally, I'd use the FluentAPI to force the table name to the OrderVendor.

Tables and columns should be in PascalCase.

No Dashes or Underscores

It's tempting to separate words in either table or column names, but don't. Keeping them PascalCased makes the transition to classes easier and clearer. Also, some databases don't play nicely with underscores, or dashes, depending on how they're used.

My personal preference is to end key names with "Id", rather than "ID". It reads just as well, and is consistent with PascalCasing and .Net naming conventions.

Some people prefer a primary key of just "Id", but if you need to run SQL queries (and you will), it's easier to have the table name in the primary key for creating joins and reading the results.

Many-to-Many Tables
A regular join table doesn't need its own primary key. Just use the other tables' primary keys to form a composite key.

The resulting classes should have these properties

A join table with payload--one that has its own columns and/or will be joined to another table, should have its own primary key of Table1+Table2+Id

Use a verb, and end the date or datetime column names with "On".

Abbreviations are, by their nature, ambiguous and culture-centric. Avoid them unless they are very common, consistent, and/or well-known in the organization or industry.

A good example of ambiguity is how to abbreviate "number". Even my schema example, "InvoiceNbr", is potentially ambiguous. But InvNo is worse. Is there another column "InvYes"?

Use Consistent Names (and Abbreviations if You Must)

When in doubt, refer to Flatt's Law #6: Clarity is more important than brevity.

To be honest, I've often found audit columns to be more trouble than they're worth. I think if auditing is needed, it's better to have a separate audit history table where you can record many kinds of changes, including deletions.

But, if I am using them, and am tracking who took an action, I don't link to another table (such as Users or Employees), but instead record the physical name. This significantly reduces linking, and makes it easy to indicate that a process (rather than a person) performed an action. In other words, UpdatedBy is a string column and contains a value like "cflatt" or "Nightly Batch Process".

Inheritance can be modeled in the database a couple of different ways. I prefer Table Per Type, as shown by the Employee and Salesperson tables. Note that the Salesperson table has an EmployeeId primary key. This is what implies the inheritance. In the application's class model, these would become: