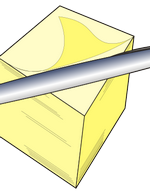 The "why" is optional, but often useful.

As a Manager, I want to create employee schedules

As an Employee, I want to see everyone's schedules so I can arrange shift swaps

As an Analyst, I need to be able to view people's timesheet data in various ways so that I can better understand where work bottlenecks come from

What If It's a Big Idea?

User stories often start as big ideas (epics). After discussion, they'll get split into smaller stories that can be better estimated and worked on.

Three Steps in a User Story

A user story is done when its acceptance criteria is met.

Value (or Title) As a Manager, I want to create employee schedules

A schedule includes employee name, id, date, from time, and to time.

[mm] I've found that the handwritten schedules end up being changed a lot due to employees swapping shifts, or being sick. All those changes make the schedule hard to read. So, it'd be great to easily reprint the schedule.

[hg] It sounds like how to print or display schedules should be a new story. What if we used kiosks instead of paper? Or maybe an app employees could view on their phones.

[ss] There needs to be control over who can change my schedules.