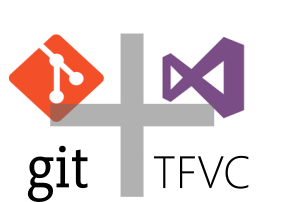 I have a client who uses Microsoft Team Foundation Server on site, and has been using TFVC version control for about fifteen years. They have a very large codebase with lots of discrete and interconnected Visual Studio solutions.

I've recommended moving to Git, and they're cautiously interested. It would be a large, challenging and time-consuming transition, so for the time being, "interested" means "no."

I couldn't imagine giving up Git. I wondered how hard it would be to use Git locally, but still check in needed commits to their TFS server.

There are a couple of weird things, but using Git and TFVC together is pretty easy.

I've only tested this in Visual Studio 2017, and if you're using Git you shouldn't be using any earlier VS version. You could, as long as you're willing to forego Git Visual Studio integration. Even 2015's integration doesn't work right.

This part's simple. You add the solution to the respective source controls as you normally would. With that said, I strongly recommend adding a .tfignore file, as well as a .gitignore.

You don't normally need a .tfignore because Visual Studio takes care of ignoring lots of files. But having one lets you ignore the Git folders.

The .tfignore file can be as simple as this:

I use one of the standard Visual Studio .gitignore files, then add this:

The standard .gitignore will ignore the $tf folder.

Of course, you can elect to commit the ignore files. For instance, I sometimes keep both ignore files in the Git repository.

Checking In to TFVC

The problem with checking in is that Visual Studio has a setting for Source Control Plugin, and naturally can't figure out whether to use Git or TFVC. The default behavior seems to be that it prefers Git to TFVC.

If you're a Git user, your typical flow with the addition of TFVC will be:

This has been a huge help to me. I'm able to code effectively using Git's power, but still support my client's environment.

This setup is also a nice way to start showing the value of Git. For example, there's likely to be very little objection to also creating a Git repo on the TFS server, and using that to synchronize long-running branches. It protects the client by ensuring my latest code is available to them, but doesn't force me to use TFVC's ponderous branching and merging.