The first was after the upgrade reboot. I had to go through a "first use" wizard, which itself wasn't awful. However, there's a screen where you're prompted to log in using your Windows Live account, or create one. I don't log into my laptop using Live, but instead with a local account. In the aforementioned screen, there was no obvious way to say "Use my local account." So, I logged in with my Live account, and later updated my account settings to not use Live.

A week later, a colleague encountered the same screen, but he instead clicked on "Create new account," and in that screen was an option to use a local account. That's not a mistake on Microsoft's part. That's intentional and deceitful. Technically, they provide a way to not use Live, but practically they're hiding the option.

The second example came when installing Greenshot, my current free screen capture tool of choice. Opening the installer, which I had just downloaded from the web, I received a prompt similar to this (I think mine said I was prevented because the app was a web download): 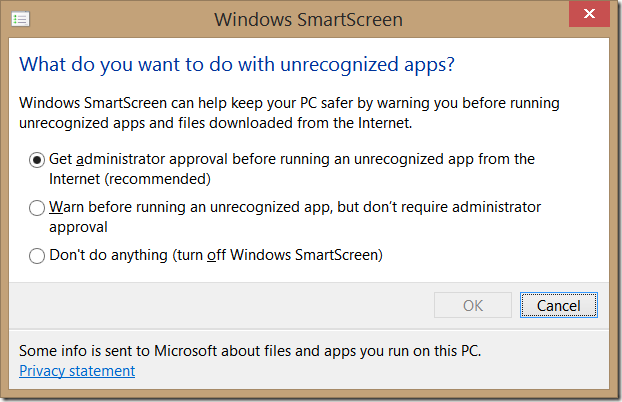 Huh? It's set correctly. I should be able to get admin approval. I go back to install, rerun, get the same warning. This, I click on "More info," and there's the choice to allow the installation. Now, I appreciate being warned about a potentially unsafe file. But don't make me hunt for the way to install it, and definitely don't misdirect me. This isn't a Penn and Teller show!

The other item is that Libraries are no longer enabled by default, and when they are enabled they don't display at the top of Explorer. I use Libraries to organize my folders from multiple sources. I guess not many people use this feature, but those who do (computer professionals) should, I think, be given weight. Hide it by default, OK. But if we enable it, please put it where it was before or let us choose where it appears. Now I'm being forced to work less efficiently, and a reason I liked Windows 7 (and, to a lesser degree, 8) is I could be more efficient.

There is a way, in the registry, to put Libraries at the top of the Desktop.